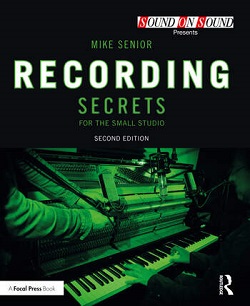 The audio comparison files in this library are specifically designed to demonstrate the effects of microphone positioning as clearly as possible. To this end, each set of comparison files is made up of performances which have been multimiked using microphones of the same model, thereby minimising differences between the files on account of performance variation and microphone design. Because of this, you can import each family of files into your DAW and mix them together if you wish, perhaps to experiment with multimic combinations or phase interactions. All files are presented both in MP3 format (with an in-browser preview button) and in uncompressed 16-bit/44.1kHz WAV format.

Below you can find links to the instrument-recordings available so far. Like the 'Mixing Secrets' Free Multitrack Download Library, this will be a continually expanding resource, so if you want to keep track of the latest uploads please subscribe to my monthly spam-free Small-studio Secrets Mail mailing list. I usually post to this list towards the end of the month, and it also includes information about the latest additions to my Mixing Secrets For The Small Studio resources. If you have any suitable multimic recordings that you’d be willing to contribute to the library, then do get in touch.

Many musicians, engineers, and companies have generously helped with the recording sessions that generated these audio comparison files, and I’ve credited them individually on the specific instrument pages. If you find these pages useful, then please follow the links and show your appreciation in any way you can. All downloads from this site are provided free of charge for educational purposes only, and the material contained in them should not be used for any commercial purpose without the express permission of the copyright holders.